Are you confused about the chaos in American streets? Do you wonder why Democrat city mayors, governors and other leaders are doing nothing about it? You’re being played—and it’s worse than you could ever have imagined. U.S. cities are burning up and hollowing out. Statues of America’s Founding Fathers are being defaced or torn down. The formerly fair and balanced American press has become unapologetically aligned with the left. Freedom of speech on college campuses is dead. Illegal immigrants enjoy citizenship rights. Professional athletes are savaging the American flag and Way of Life that made them multimillionaires. Police departments are being defunded as U.S. citizens frantically arm themselves.

Yet none of this should surprise anyone who has been paying attention.

For many years Americans have been warned that a plot to subvert America really was unfolding, and that we needed conviction and courage to confront it before it reached critical mass.  Sadly, however, Americans never seem to react in a timely manner to an existential threat like Hitler, Hirohito or Osama Bin Ladin.

Decades ago, on April 3, 1969, writer G. Edward Griffin, author of The Fearful Master and nearly 50 other books, lectured about this effort to subvert America. (See https://www.youtube.com/watch?v=iLV7KU0Bo2k.)  As early as 1928 international communism identified exploiting race relations in the U.S. as the key to this plot. Griffin explained that the purpose of the widespread riots of 1968 and 1969 was to compel the U.S. to move gradually and legally toward socialism and that the building of socialism in America was the communist revolution. Griffin was especially concerned with black studies programs—which teach a revisionist, Marxist view of U.S. history that paradigmatically frames whites as oppressors and blacks as perpetual victims and encourages a separate black national identity—that then were gaining traction at American universities. In the early 1980s, former KGB operative and defector Yuri Bezmenov (aka Tomas Schuman) instructed that the Soviets were waging total psychological warfare against the U.S., employing the strategy of the ancient Chinese military theorist Sun Tzu that subversion—destroying your enemy from within—was superior to military conquest.  (See https://www.youtube.com/watch?v=avbIhMi9OWg.)  Bezmenov explained that the ultimate purpose of subversion was to negate the common sense and critical faculties of American citizens so thoroughly that they could not protect themselves. Subversion seeks to divide constituent social groups—blacks vs. whites, women vs. men, gays vs. heterosexuals—in order to spawn distrust, dissension and dysfunction (i.e., identity politics). U.S. members of academia, the media and Hollywood elites are responsible for most subversion.

Most importantly, Alinksy emphasized in Reveille that radicals do not seek to improve or reform an existing and functioning society. Rather, radicals strive to realize an abstract, visionary utopia—to “build the world of men’s dreams” (italics added). Radicals are devoted to “an eternal war” without either compromise or rules of fair play. And politics represent unconditional war.

Radicals devote their energies exclusively to seizing power. Radicals cultivate conflicts among the races, sexes and social strata to destabilize, but the issues they employ for so doing are not the issues with which they are genuinely concerned. Rather, and as one Alinsky proponent explained, “the issue is never the issue. The issue is always the revolution.” (Italics added.) Key Alinsky tactics include:

This backdrop frames the current escalating riots as an attempt by the radical left to bring America to the “crisis” stage of subversion coinciding with the November 3, 2020, election. The call to “defund” and “reimagine” policing aligns with this objective, amplifying general anxiety and instability. As the Claremont Institute’s Matthew J. Peterson recently argued in his article “The Democrat Party’s Riots” in The American Mind, the party cannot disown these riots now that their intensity and violence have escalated: “You built this. You refused to condemn it. You asked for this.” (See https://americanmind.org/post/the-democrats-riots/.)

In August 2020 historian Victor Davis Hanson stated that Joe Biden had struck a “devil’s bargain” with the radical left, and that the Democratic Party had mortgaged its soul to sponsor chaos on America’s streets in the hope of generating political capital. And in a hearing recently before the House Judiciary Committee, Attorney General William Barr challenged any Democrat member to denounce burning a federal courthouse. None responded.

The choice in November 2020 is not between Donald Trump and a candidate with a more conventional personality. Neither Ronald Reagan nor John F. Kennedy is on the ballot. Instead, the choice is between a free, economically vibrant America, with vast horizons and unrealized potential, and a dark, impoverished state peopled by classes of putative oppressors and victims, obsessed with contrived grievances and reparations, disavowing God, and deprived of every precious civil liberty and property right that our Constitution has guaranteed for the past 233 years and for which countless American patriots have died.

Note: The authors are not part of any U.S. political campaign or any political action committee. 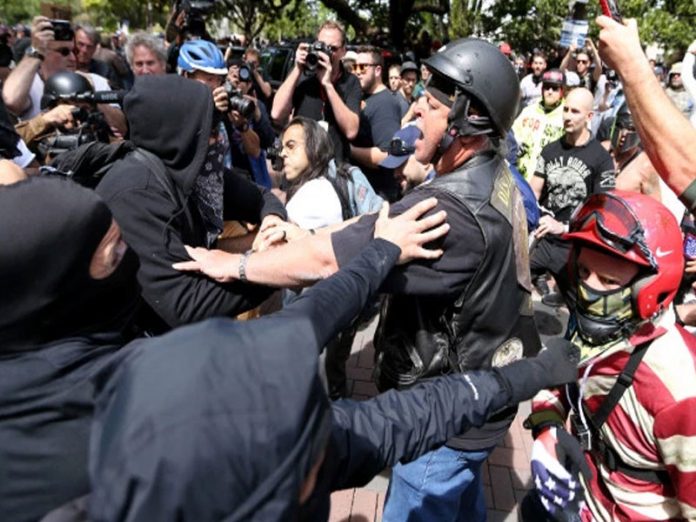 Riots Calculated to Bring America to 'Crisis' - Fair Use for Education

To fully appreciate the radical left’s plan for the U.S., you need to look no further than Venezuela. Author and journalist Dinesh D’Souza, in his recent book United States of Socialism (2020), draws seven parallels between the way communists took over and ultimately destroyed Venezuela and the subversive activities of the radical left in the U.S. today.

“America will never be destroyed from the outside. If we falter and lose our freedoms, it will be because we destroyed ourselves.”
― Abraham Lincoln

“A house divided against itself cannot stand.”
– Abraham Lincoln

The Liberty Tree is an informal group of American men and women who seek to preserve the identity of our country as a Constitutional Republic dedicated to protecting the Bill of Rights and governed by the Rule of Law. We take our name from the famous tree in Boston where Massachusetts colonialists began congregating in the 1760’s to oppose the incremental tyranny of British colonial imperialism and to plan  how they would combat it. The Liberty Tree is  not aligned with any political party, campaign, or PAC. It accepts no advertising and earns no income of any sort, but rather is entirely self-funded  by its volunteer members.